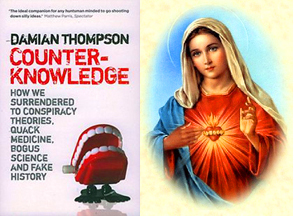 From the 2009 article Mysterious cancer treatment ‘backed by the Virgin Mary’ is plugged by major Catholic news agency – written by Damian Thompson, the Editor of Telegraph Blogs and a columnist for the Daily Telegraph – we got the news:

Zenit, the Rome-based Catholic news agency, has a reputation for accurate and careful reporting. So what on earth is it doing effectively advertising CellAdam, a “natural” cancer cure whose manufacturers claim to be working under the special protection of the Virgin Mary and believe it will earn a billion dollars?
…
Janossy [from the manufacturers, Biostemworld] says an ongoing 10-year study in Hungary is currently focusing on two groups of cancer sufferers. One group, who all went through chemotherapy, have since died, but those who have been taking CellAdam are still alive.
…
You don’t have to be Ben Goldacre to work out just how dodgy that statement is. Apparently, an unnamed religious order is preparing to test this medicine, which Biostemworld wants to keep out of the hands of unscrupulous US pharmaceutical companies. Instead, profits will be ploughed back into Catholic charities. Hmm.
…
Again, what is Zenit playing at, reporting these claims so uncritically? Pentin (the author) even says that “perhaps the most persuasive proof of this drug’s effectiveness is the belief among those running Biostemworld that this discovery is Providential”. That is proof?

Nope, that it’s not proof, according to a few commenters:

What a load of absolute bullshit. How dare these frauds give false hope to the sufferers of disease. The Church should be quick to distance itself from this rubbish. I wonder if the Pontifical Academy for the Sciences could scrutinise it.

Help us bust this wide open with our current investigation. Thank you… any information to help is appreciated.

Want to be fair, so let’s hear it from the Biostemworld people, as reported in
A Believe-It-or-Not Cancer Drug / CellAdam Is Successful, Natural, Ethical

“This is a totally unusual and huge breakthrough,” says Dr. Thomas Janossy, president of Biostemworld, the company producing the drug internationally.

So why has hardly anyone heard of it? According to Biostemworld, the reason is because it was developed in Hungary during the country’s Communist era.

Imre Beke, Biostemworld’s chairman, calls it a “diamond in disguise” because of the numerous obstacles that have prevented this drug from reaching a wider market.

The first hindrance has been the Hungarian language. “As the researchers of this drug only speak Hungarian, it’s not been widely published in international media and so nobody really knows about it,” says Beke. Then there was the country’s Communist past and personal rivalries that remained even after the fall of the Berlin Wall.

“Envy, old skirmishes and conflicts, pharmaceutical companies worried about losing their market share in the cancer business — which is huge — all played a part,” Beke explains. “Now”, says Beke, “we’re really breaking out.”

Beke? Imre Beke? It can’t be! Our Imre Beke is a pious Republican, not a con, as this article headlined Catholic News Agency Says Cancer Cure from Virgin Mary claims:

Our Lady of the Miraculous Cancer Cure for Chumps… An Italian Catholic news agency, Zenit, has published reports of an alleged cancer cure with the uncontested claim that this supposed medical treatment is sponsored by the mythical Virgin Mary.

The clever marketing ploy these cons are using to fleece the sheeple seems to be a unique blend of New Age I’ll-believe-anything mumbo jumbo with the well established gullibility of those already afflicted with religious delusions about invisible super virgin faerie mothers that live in the sky.

What if the folks who developed this miracle cure were offering you a chance to get in on the ground floor of this “unique Business Opportunity“? Now do you believe that the Virgin Mary is cashing in sponsoring this breakthrough?

Hold on a sec! I think I received once an email from Biostemworld:

I believe that an honest exchange of opinions is a healthy exercise for any community, including our GOP…

Oops! So, it’s our Imre after all…Need more proof? Here it is: 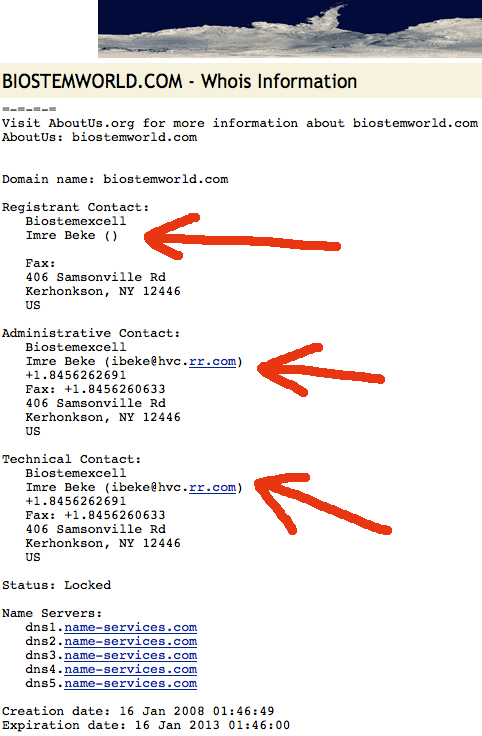 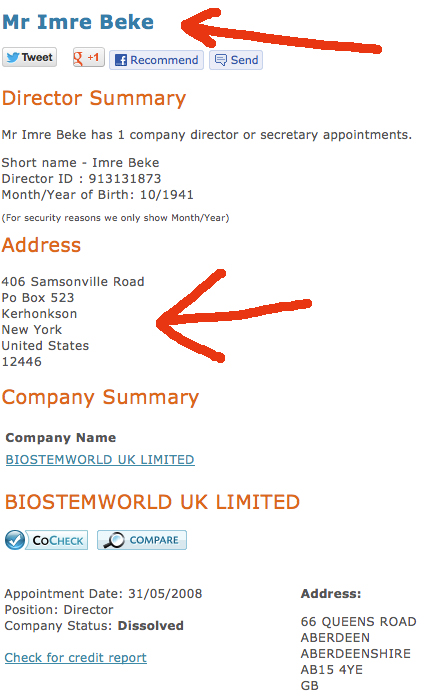 Quod erat demonstrandum. My advice? Do not run against Imre Beke for a seat on Ulster County Republican Committee. You never know who’s backing him up…

7 Responses to Mysterious cancer treatment backed by the Virgin Mary