A previous post details the background for this one, but here is the short version:

In 2010, Rochester Councilwoman Manuela Michailescu announced her running for a Republican Committee seat. Imre Beke Sr. went bananas via demagoguery. David O’Halloran made clear his disapproving of Republicans challenging Republicans’ petitions, and asked for identical petition forms for him and Manuela.

David O’Halloran to Manuela Michailescu:
Let’s make sure our petitions are identical. I will give you a copy of mine and vice versa. Then Tom Turco will be asked to insure either or both are correct and challenge proof.

A sneaky plan cooked by Imre Beke, Sr., Imre Beke, Jr., and both Bernardos – with help from Tom Turco at the Board of Elections – succeeded in having Manuela’s petition denied. David O’Halloran accepted full responsibility:

David O’Halloran to Manuela Michailescu:
You were confirmed on October 5, 2010 by the UC GOP Executive Board as an appointed member of the UC GOP Committee representing the Town of Rochester. Congrats! 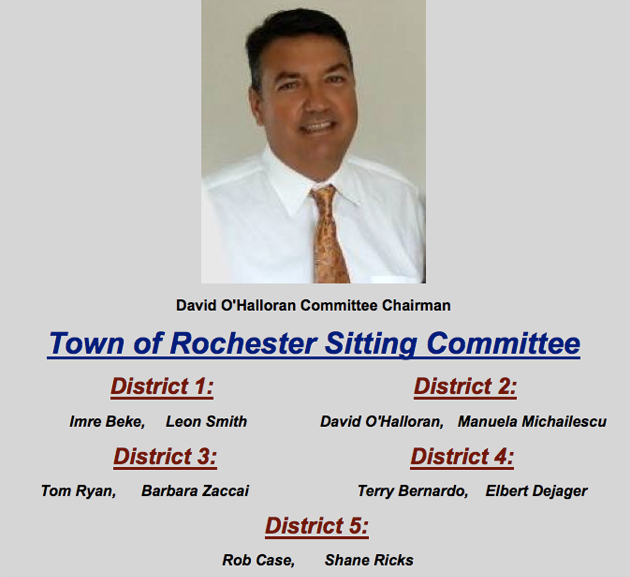 Imre Beke in District 1. Manuela Michailescu in District 2. No two ways about it.
I immediately published the members’ list on Rochester Republicans website.

On September 12, 2011, the night before the Republican Primary, I personally witnessed David O’Halloran splitting the District 2 Summary Voter Master Call List (below) with his fellow District 2 member Manuela Michailescu. No two ways about it.

I also witnessed David asking Manuela: “If you win, are you going to forgive us?”

Manuela Michailescu did not win the Primary. Sure enough, a change popped up on Rondout Valley GOP website:

Imre Beke in District 2. Manuela Michailescu in District 1.
When Manuela raised the issue in a Committee meeting, David & Co. dismissed her: “You are confused.”

Those familiar with Manuela’s activity as Councilwoman, her attention to details and her annoying errors-discovering skills – from minutes to town’s bills – know that nothing is further from the truth. To imply that Manuela doesn’t know what District she has been representing for two years is simply insulting.

At the Republican Committee meeting in May 2012, Manuela Michailescu announced that she would file petitions for the only district she always represented, Election District 2.
She received from the GOP headquarters an error-ridden petition… for District 4!

Pushed from District 2 to 1 to 4. Funny how all these things happen only to Manuela.
Can you spell discrimination?

15 Responses to Election DisTricks in Rochester