To ban or not to ban…

Posted on August 2, 2012 by Jon Dogar-Marinesco 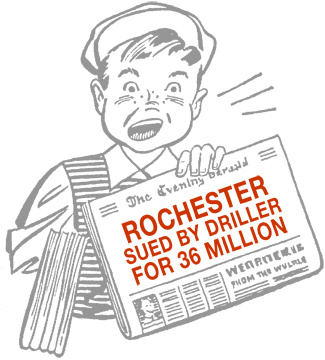 You didn’t know that a driller sued the Town of Rochester for 36 million because of a local law prohibiting fracking, did you?

Relax, it’s just a joke to help me make a point. Driller to NY: Stop the local bans, or we’ll sue – an article in Freeman – certainly suggested the scenario…

ALBANY, N.Y. — A natural gas drilling company is taking a new tack in the industry’s fight against local drilling bans: It’s threatening to sue if New York regulators don’t step in and extinguish the prohibitions.

More than 30 municipalities in upstate New York have passed bans on gas drilling and more than 80 have enacted moratoriums in anticipation of DEC completing its environmental review and lifting the 4-year-old state moratorium. The actions are in response to fears that fracking, which frees gas by injecting a well with chemically treated water at high pressure to crack rock deep underground, could contaminate water supplies or cause other harm. Drillers and DEC say state regulations and standard industry safeguards protect against harm from drilling and fracking.

The natural gas drillers say local laws create a web of regulation that impede development, and we see more action in courts of law:

A Pennsylvania court last week ruled that the state can’t restrict localities from using zoning laws to regulate oil and gas drilling within their borders. Ohio townships were stripped of regulatory authority over gas drilling under a law passed in 2004. Ordinances enacted by a handful of West Virginia communities to ban gas drilling were overturned last year by a judge who said the state has sole authority to regulate the industry. Morgantown, W. Va., enacted new zoning ordinances recently that restrict drilling to designated industrial zones; an industry group has said it may challenge that in court.

So, it’s not impossible that someone might sue the Town of Rochester because of a drilling ban. Given the volatility of the judicial proceeding, it’s not too far-fetched to imagine the town losing in court and having to pay a few gazillions, give or take.

Now, the municipalities didn’t wake up one day asking themselves “why don’t we pass a fracking ban tonight.” If they passed a law against drilling, they did it under pressure from anti-fracking activists coming to public hearings, defending their cause and waving sheaves of papers bearing signatures.

And now, please, allow me to introduce you to my idea… At the top of each page on which signatures are gathered, insert this paragraph in bold letters:

I support this cause as well as passing of a law in favor of it. I understand that if my Town is ever sued for money because of this law – and loses in court – I promise to pay the Town a sum equal to the total amount of found liability divided by the number of signers.

DISCLAIMER:
Do not label this post as pro- or anti-fracking. Any cause would do it.

4 Responses to To ban or not to ban…