Ulster County lawmakers have scrapped an 11th-hour plan to solicit proposals for the purchase of the Ulster County Resource Recovery Agency’s assets.

Instead, county legislators are expected to consider today a resolution crafted last week to form a 13-member “non-partisan” commission to make recommendations to the county Legislature on the future of the beleaguered agency.

(The resolution was approved in the Legislature’s meeting on August 14.)

Hein called the creation of the Commission “another embarrassing example of failure to lead by the legislative chairwoman,” and said the Legislature has once again shown itself “to be either unable or unwilling to address this tough issue.”

Legislature Chairwoman Terry Bernardo could not be reached for comment, but – one week before – she wrote:

“This is exactly why we have a deliberative committee process — so legislators can bring up ideas, discuss them, and make them better. Former legislatures have failed to address the RRA issue and this legislature is doing all we can to take a hard look at the serious ideas that are being considered.”

In the linked Freeman article the Legislator Carl Belfiglio is quoted as saying:

“I didn’t think that anybody got the message of exactly what flow control was and I think mostly what had happened was some of the legislators not understanding exactly what it was kind of made blanket statements about taking money out of one pocket and putting it in the other or (that it would be) some kind of legalized monopoly.”

Then Town of Rochester Councilwoman Manuela Michailescu refused to accept that Belfiglio included Bernardo among “the legislators not understanding exactly what” flow control was, and sent this email to which she never received an answer: 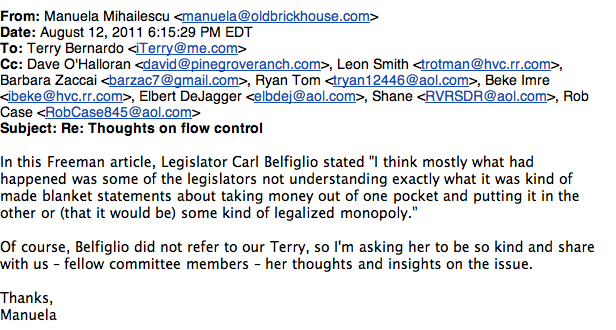