Please, have another serving of Bernardo’s bull

This is a press release sent out today by Terry Bernardo: 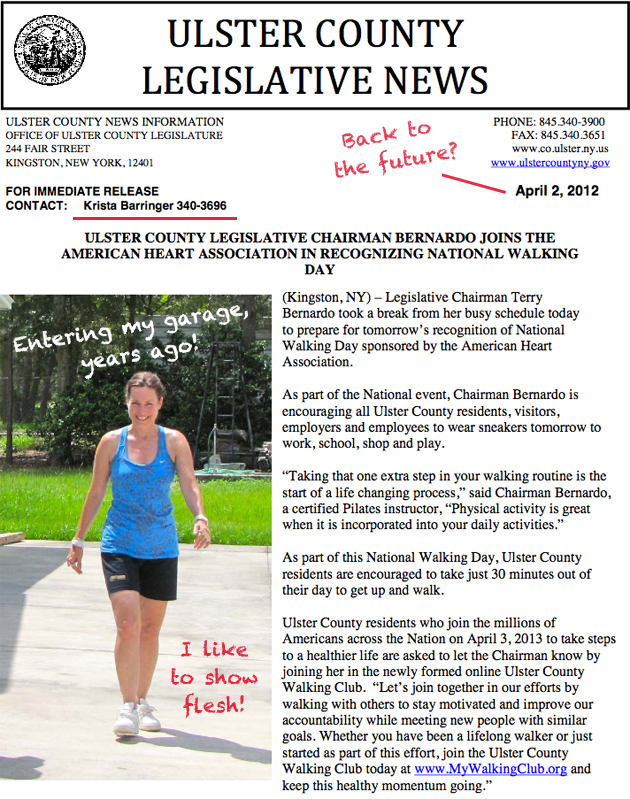 Sloppy, aren’t we? Imagine dating a real County document one year earlier. Unless dating the press release April 2, 2012 is some kind of a secret handshake among Bernardo loyalists.

So, here she is – Legislative Chairman Terry Bernardo – taking “a break from her busy schedule today to prepare for tomorrow’s recognition of National Walking Day sponsored by the American Heart Association.”

Busy schedule my foot – her taxidermist is closed on Tuesdays – but lets see how she prepared for tomorrow’s recognition: “Chairman Bernardo is encouraging all Ulster County residents, visitors, employers and employees to wear sneakers tomorrow.” Oh, yeah, that required a big chunk of time off her busy schedule!

You want more? Look here: “As part of this National Walking Day, Ulster County residents are encouraged to take just 30 minutes out of their day to get up and walk.” Excuse me, what about the residents of Orange County? Langdon Chapman could use some exercising too…

And now, ladies and gentlemen, it’s my pleasure to introduce the Blah-Blah-Blah: “Ulster County residents who join the millions of Americans across the Nation on April 3, 2013 to take steps to a healthier life are asked to let the Chairman know by joining her in the newly formed online Ulster County Walking Club.”

Before you get the wrong idea that Terry Bernardo is actually part of something bigger than herself, look below: 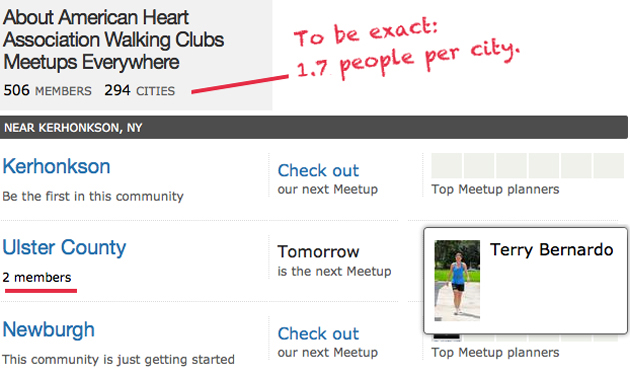 Terry’s millions of Americans prove to be only 506 worlwide, while the newly formed online Ulster County Walking Club has only two members – Terry Bernardo and Krista Barringer:

What, pray tell, is the purpose of this press release calling for action next day at 8:00 AM, other than sending to media another picture of Terry the Exhibitionist?

8 Responses to Please, have another serving of Bernardo’s bull