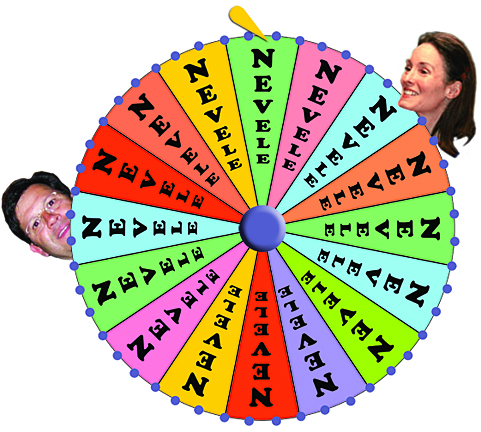 After seeing that public service and Terry Bernardo have nothing in common, I tried to understand why she’d be involved in politics at all – the ten grand legislator salary being peanuts for her-n-hubby. Exactly one year ago tomorrow, everything made sense. Look above, read below… it’s so clear.

On April 12, 2012 the Rondout Valley Business Association and the Ellenville-Wawarsing Chamber of Commerce hosted a presentation from the Nevele Investors LLC’s principal, Michael Treanor.

From the article Nevele group lays out plans for RVBA during morning breakfast by Sherry Chachkin, published in Blue Stone Press on April 20, 2012:

Treanor credited, among others, County Executive Mike Hein and County Deputy Director of Economic Development March Gallagher, who was in attendance, for their support. County Legislature chair Terry Bernardo (R-Accord), also in attendance, said: “As a resident and business owner and a representative of Wawarsing, I personally support the project.”

Bernardo, noting that County Legislative Counsel Langdon Chapman had been named Counsel to the Senate Commission on Racing Gaming and Wagering, said “I hope to use my connections to help you effectuate your plan.”

Resolution No. 154 June 19, 2012
In Support Of The Inclusion Of The Nevele Hotel Site In Any State Constitutional Amendment, Law, Regulation Or Policy Which Lists Or Proposes Sites Eligible For The Operation Of A Class III Gaming Casino.
Resolution No. 154 passed 22-0.

Mentioned in the resolution:

WHEREAS, the Town Board of the Town of Wawarsing has unanimously approved and supported locating a gaming casino at the Nevele site through passage of Resolution No. 11 of 2012.

And last, I would like to see a concerted effort to focus on resort development. The desire for casino gaming that some have is nice, but the reality is we cannot depend solely on helping one resort. I would like to see a concerted effort to promote some of our destination and non-destination resorts in the Towns of: Lloyd, Rochester, Wawarsing, Saugerties, and Shandaken and also to lobby the State for Video Lottery Terminals (or VLTs) for no more than three of those resort areas if they want them – and just to be clear, I said support all of them, but only VLTs for those that want them – no VLTs in Saugerties, I know.

April 10, 2013 is going to be remembered as the day when the $hit hit the fans of Terry Bernardo. Daily Freeman had no less than three articles on the topic.

O’Halloran, who heads the Republican Committee in the town of Rochester, where the Bernardos live, also said he is actively seeking candidates to run for the Legislature seat now held by Terry Bernardo.

“We’re not convinced at this time that the right candidate for the district is Terry Bernardo,” he said.

“Dave has gone between shock that I would abstain to asking me to meet with him to discuss a strategy so we could support one another,” said Bernardo, R-Accord.

Legislature Majority Leader Kenneth Ronk said it would have been “irresponsible” of the Legislature to adopt the VLT resolution now because the state isn’t looking to approve the machines at locations other than racetracks.

Although it doesn’t mention Bernardo, R-Accord, by name, the resolution refers to “an incumbent legislator” whose business “was one of those that did not deliver on its promised jobs.”

In their application for a payment-in-lieu-of-taxes, or PILOT, agreement for their Accord roller rink, Skate Time 209, Bernardo and her husband, Len, said they would create 22 full-time jobs, but the company created only nine full- and part-time positions.

I let you process the contradictions, dirty deals and arrogance exposed above – but not before pointing out that Len and Terry Bernardo promised 26 jobs, not 22. Current count: 4.5 – including theirs!

7 Responses to Bernardos’ wheel of fortune