Too late to the party 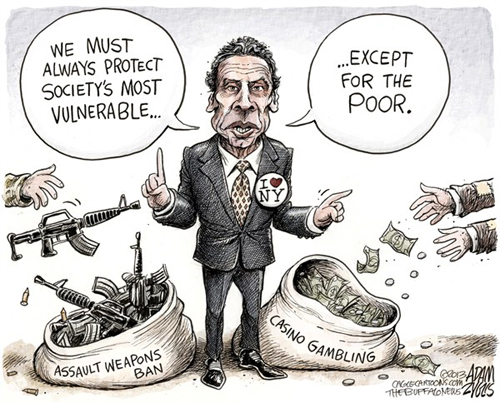 From Albany Doubling Down as Casino Boom Fades (The New York Times):

ALBANY — New York State is charging headlong into the casino business, with four full-service gambling resorts expected to be approved this fall and opened as early as next year, and talk of a torrent of new revenue, thousands of new jobs and a powerful economic jump-start for long-depressed upstate communities.

Supporters of the expansion — most notably Gov. Andrew M. Cuomo — hope it will reverse the fortunes of economically stagnating regions like the Catskills, where little has filled the void left by the demise of the borscht belt.

But analysts, economists and casino operators warn that the industry is already suffering the effects of fierce competition, if not saturation, even in the Northeast, once a rich, untapped market. Winnings are flat or shrinking in many places. Casinos in Atlantic City are closing; Foxwoods, in Connecticut, is cutting costs. The longstanding image of gambling as a no-doubt winner for state governments has quietly gone the way of a bettor’s bankroll after too many hours at the tables.

None of which bodes well for the long-term goals of Mr. Cuomo’s plan.

Meanwhile, back at the ranch…

ELLENVILLE – Nevele Casino, Resort and Spa Chief Executive Officer Michael Treanor said he considers the five-year period with a tax freeze at about one percent of full property value to be an appropriate exchange for the amount of community benefits a casino will bring at a time when the gaming industry is experiencing a downturn.

“The northeast of the United States is approaching a saturation point of gaming,” Treanor said. “It is a topic of conversation with our investors. I don’t think people are overly troubled by what’s happening in Atlantic City because Atlantic City has been declining for years. …As [new] states have come online, it has broken the monopolistic nature of Atlantic City on the east coast.”

News outlets report that one Atlantic City casino closed earlier this year, a second will close at the end of the month, and a third has threatened to close if a buyer is not found.

The comments to the article are worth reading:

No PILOT deal for the Nevele. Do business here because it will be profitable or don’t. We are not here to subsidize your venture. (sondra3955)

Mr. Treanor makes some interesting points: “The northeast of the United States is approaching a saturation point of gaming,…” So is this a good time to build more casinos? “…the financing community looks at the Nevele project … as just a business.” In other words, the “project” is too risky without a guaranteed PILOT. “… he considers the five-year period with a (PILOT) to be an appropriate exchange for the amount of community benefits the casino will bring”. Well the rest of us don’t see it that way. Let Treanor and his investors finance the Nevele with their OWN money in this already saturated market, and Ulster taxpayers will finance their own fire apparatus, air traffic studies, and DARE. I hope the IDA sees through Treanor’s BS, and doesn’t leave us holding the bag a la SkateTime, Armor Dynamics, and the Aaron’s fiasco! (Hurleyguy)

Mr. Treanor, what you are asking is that those who are going to be coming to your place pay to have it built and pay to play. You want your cake and to eat it also. You only get one piece of the pie! Give it up and let some other county have it. (obaki)

The voters who approved the new casinos in NY were expecting to collect taxes, not give special tax breaks. If a business can’t survive while paying its fair share then the entire tax system needs to be reconsidered. Giving a tax break to one business adds to the tax burden on everyone else, and we already know that the high taxes in NY are a problem for everyone. (wallyagain)

3 Responses to Too late to the party