Councilwoman Sherry Chachkin: “I was a newbie on all counts…” 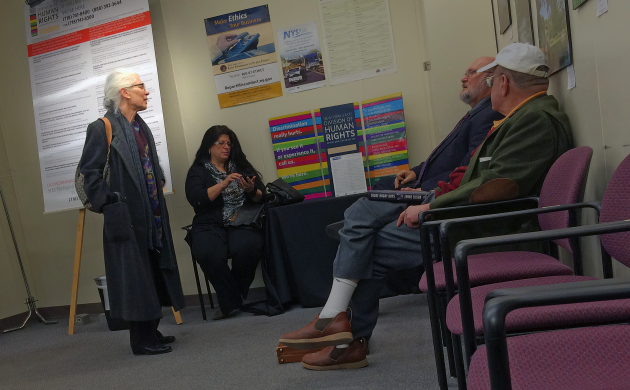 Town of Rochester Councilwoman Sherry Chachkin (left) waiting for her turn to be interviewed during the Two-Party Conference, conducted on February 17, 2015 in the New York State Division of Human Rights office in Albany.

Interview of Town of Rochester Councilwoman Sherry Chachkin:
(with my two cents in the narrow column)

Q: How long have you been on the Board?
Ms. Chachkin: I have been on the Board since January 2014. Between 2008 and 2013, I reported on town board meetings and other matters for a little newspaper called Bluestone Press. I knew who she was. I have had a personal relationship with Ms. Michailescu – I am a foreign film fan and I mentioned to her all of these impressive films that are coming from Romania and she really appreciated that and we talked about writing reviews, etc. We had daily emails after that. I actually went to the Romanian Film Festival with her one day.

At the time of the interview Ms. Chachkin knew Manuela for at least seven years. Reporting on the town board meetings during Manuela Michailescu’s 4-year term as Councilwoman, Ms. Chachkin mentioned often Manuela’s positive public persona (click here, see page 5). After exchanging daily emails, going together to a film festival, and nurturing a friendship, it is only fair to assume that Ms. Chachkin got an inkling of Manuela’s character and personality.

Q: Why was Cindy Fornino appointed?
Ms. Chachkin: I had no nomination. I voted for Cindy Fornino. From the discussions I had with my fellow board members, we were trying to come up with the best appointment for the Board and town’s stability. Since this was a four month appointment and whoever was appointed would have to run for election, I agreed that Ms. Fornino would represent a segment of the community that needed to feel that they had a place at the table, to show the town board being a bona fide representative. There had been a lot of division in 2007, and a lot of healing since the time of those divisions since Carl was elected, and we really wanted to continue that. We tried to find an appointment that would continue the stability. Our communication has fallen off since the appointment. It’s been very personally distressing to me. Her national origin was not a factor for me, and I didn’t get any indication from any of my other board members that this was a factor. Despite what she is saying today, it’s distressing that she would have any belief that I would have any part of any decision based upon a discriminatory bias.

Discussions with your fellow board members? When and where did those discussions take place? There was no discussion in front of the people at the time of the appointment, as required by the Open Meetings Law. In case you think that I’m biased, here is an opinion I received by email from somebody in Carl Chipman’s amen corner:

Jon
I have no idea why Sherry and Tony voted for Cindy. In fact, I have no idea how they seemed to have agreement w/Carl prior to the motion which put forth Cindy first (thereby eliminating any real discussion). I was puzzled to say the least.

Ms. Chachkin reveals Town Board’s intention to manipulate the coming elections: Two Democratic and two Republican Town Board members made an official business decision tainted by their wish to assure a Conservative candidate’s victory… Only in Rochester!… and only under Carl Chipman supervision!

When Ms. Chachkin said “we tried to find an appointment that would continue the stability,” doesn’t she gratuitously imply that Manuela Michailescu was a destabilizing factor, that a lot of healing happened since Carl was elected, despite Manuela being on the same Town Board?

By the way, speaking of stability in town, here is a quote from the same email mentioned above:

But, if Cindy wins, next year will be a whole different atmosphere with a lot more going on in order to bring Dems aboard to replace her and Drabkin!!

The last part of the answer takes the cake: “…I didn’t get any indication from any of my other board members that this [national origin] was a factor.” Apparently, Ms. Chachkin has a clear image of how discrimination works… Something like: “I make a motion to look at a map and see where Manuela was born… If it’s more than 70 miles away from Town Hall, bingo!, we will not appoint her…”

Q: Why wasn’t Ms. Michailescu not selected?
Ms. Chachkin: I was a newbie on all counts to actually sitting on the board, to politics. Unlike the other board members, I had not actually sat on the board with Ms. Michailescu, or been contemporaneously on the board. I had been on the board for less than a year. All the board members had incredible amounts of seniority over me on the board. I respected their political judgments a huge amount… I respected their feelings on who might best carry out all of the goals that we talked about having. I was aware of their phone conversation with Mr. Chipman prior to the interviews and this was very troubling to me. I learned that Ms. Michailescu and her husband would use that kind of language and tactics concerning the appointment. I knew from our communications, once it became pretty likely that Mr. Cilenti was going to resign before his term was up, that Ms. Michailescu greatly desired the seat and had great expectations that it would be hers. Carl told me that Ms. Michailescu expressed that she should have this appointment and then Jon got on the phone and the whole incident just troubled me. It didn’t change my mind. I hadn’t made a decision yet and we didn’t hold the interviews yet. My mind was still open. But this was something I took into consideration. I had no reason to doubt Mr. Chipman’s account. He was obviously very upset.

Ms. Chachkin took an oath to faithfully discharge the duties of the office, not to respect the board members’ “incredible amounts of seniority,” their political judgments and their feelings. Candidate Chachkin made the promise – still on the Democratic Committee website – to be fair to all people. Was she fair to Manuela?

If Ms. Chachkin was troubled after hearing Chipman version of the phone conversation, why didn’t she call Manuela for the other half of the story?

“No reason to doubt Chipman’s account, because he was obviously very upset?” He was upset because Manuela confronted him with his plan to fake a fair appointment.

Moreover, Ms. Chachkin had at least one good reason to be suspicious of Chipman’s version of anything. In July 2009, when the Bernardos cooked an idiotic residency issue, the Blue Stone Press screamed on its cover that Manuela must resign, courtesy of the reporter Sherry Chachkin speaking with Supervisor Chipman who decided Manuela’s fate as a Town Board member without even letting her know what the whole brouhaha was about.

I do not appreciate Ms. Chachkin making this statement: “I learned that Ms. Michailescu and her husband would use that kind of language and tactics concerning the appointment.” A lawyer should not repeat information received from other people that she cannot adequately substantiate.