Too much coffee can’t be that good for you…

Bernardo said because of the personal and business relationships she had with O’Halloran, a fellow town of Rochester resident, she was ethically bound to remove herself from the legislative debate over a resolution asking the state to allow the game terminals at Pinegrove and the Hudson Valley Resort.

“I abstained because it would personally benefit Mr. O’Halloran, and I have a relationship with him,” she said on Friday.

Bernardo said O’Halloran, as chairman of the Rochester Republican Committee, raised money for her Legislature campaigns and, as chairman of the Industrial Development Agency, was in a position to reach a settlement in a dispute with the Bernardos’ business, Skate Time 209, over a payment-in-lieu-of-taxes (PILOT) agreement with the agency. “There were conflicts of interest all over the place,” Mrs. Bernardo. “I was staying out of it.”

“There were conflicts of interest all over the place,” says Terry Bernardo. You’re damn right, I say. You should have seen them before O’Halloran – prodded by State – was no longer able to protect your PILOT tax breaks.

“I was staying out of it,” says Terry Bernardo. Shame on you, I say. Town of Wawarsing passed a resolution in support of a casino at Nevele. You voted for the same thing in Legislature. Town of Rochester passed a resolution in support of VLTs at two local resorts, and you stayed out of it? Shame on you for abstaining from representing your own town.

In another email, he asked the chairwoman to come to the Pinegrove so O’Halloran could buy her a cup of coffee and the two could discuss a strategy “to show our support for each other.”

Support for each other? With the cat out of the bag? Not happening.

Bernardo said that, in a phone call, O’Halloran told her he would “ruin” her and find someone to run against her in the fall 2013 election for her legislative seat.

This is so telling, because, you see, in the Town of Rochester only two people count: one is glued to a Legislator seat, the other one has the solvent.

Terry Bernardo, do you remember the May 2012 Town of Rochester Republican Committee meeting, when Manuela Michailescu announced that she would challenge you in 2013? Perhaps you recall your reaction to her announcement? Having that vacant stare, that mute face? And finally managing to say “I lost my train of thought?” Doesn’t ring a bell? OK, be like that…

Terry Bernardo, do you remember at least one of these two emails sent to all Town of Rochester Republican Committee members? 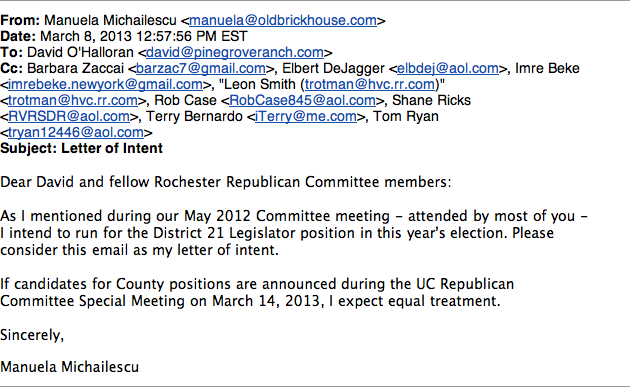 How about the Ulster County GOP Chair Roger Rascoe announcing Manuela’s candidacy at the March 14 meeting in Kingston? OK! Now that you remember it, try to answer this question: why would O’Halloran threaten on April 10, 2013 with finding a challenger for you… when you had a challenger since May 2012? Unless, of course, David wants to replace you with somebody NOT different from you.

Please allow me to quote from a comment to I don’t want to say I told you so, on the Liberty Coalition blog:

Note to Manuela – Rochester NEEDS you. Run for office and take charge – the good and honest citizens of Rochester will follow a strong leader with NO self interest!