David O’Halloran, full of it 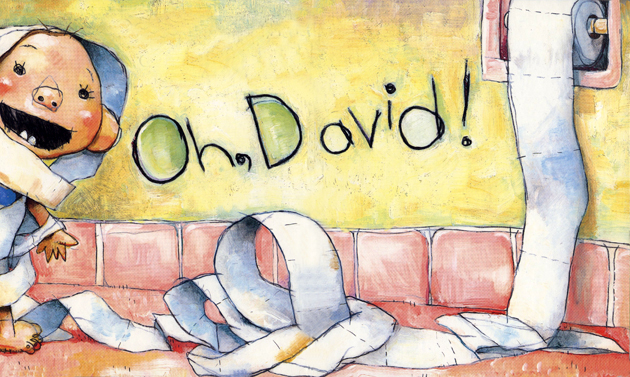 The following comment was flagged for containing way too many links, and did not make it through without my approval. On behalf of the anti-spam software, I apologize to David O’Halloran.

While we are all enjoying these open discussions, I would like to bring up a subject that has left a bad taste in my mouth for a few years. http://WWW.ROCHESTERREPUBLICANS.COM. Jon, please correct me if I make any mis-statements of fact. As a Rochester Republican Club member you volunteered your experience in website design to the Club. The nominal payments made to you were just tokens of appreciation, no relationship to the countless hours of time you gave. When the idea for creating a website was launched at a Club meeting- Leon Smith wrote a check to cover the cost of http://www.RochesterRepublicans.com.

A year or so later, your personal politics were no longer aligned with the Club. The Club repeatedly asked for the Codes & Passwords to http://www.Rochester Republicans.com. After ignoring our request numerous times you told the Rochester Republican Club, No…you own the site and its domain name.

Rochester Republican Club was established before my time and will be around long after I’m gone. Please do the right thing, give the Club back it’s domain name. No need to transfer any content. You are creative and will find a suitable name for your website. http://www.RochesterRepublicans.com rightfully belongs to all past, current and future members of the Rochester Republican Club.

Bad taste in your mouth for a few years? OMG, I don’t know what to say… did you try toothpaste? altoids? a change of diet? Can’t help you there buddy, but I’m taking you up on “Jon, please correct me if I make any mis-statements of fact.”

FACT #1
I registered the domain name RochesterRepublicans.com on September 16, 2003 – long before I heard of David O’Halloran. It is owned by Point Blank, Inc., my advertising agency. I used the domain name for the Republican campaign’s website in 2003 elections. 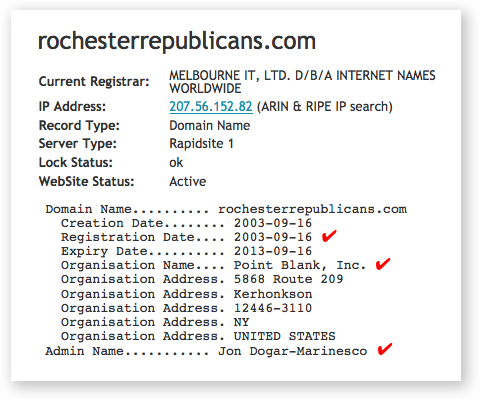 FACT #2
In 2005, when the Rochester Republican Club was brought back to life, I volunteered to design the Club’s website. I have never offered the domain name RochesterRepublicans.com.

FACT #4
I never accepted a penny for my work related to the Rochester Republican Club’s website. The token payments David mentioned were made for my work on the print campaigns of 2005 and 2007 elections. FYI, when counted, the countless hours of time I gave to the Club are about 3,000. If it crosses O’Halloran’s mind to put a marketplace value on my time, he’ll be surprised to see who is the biggest political donor in town. 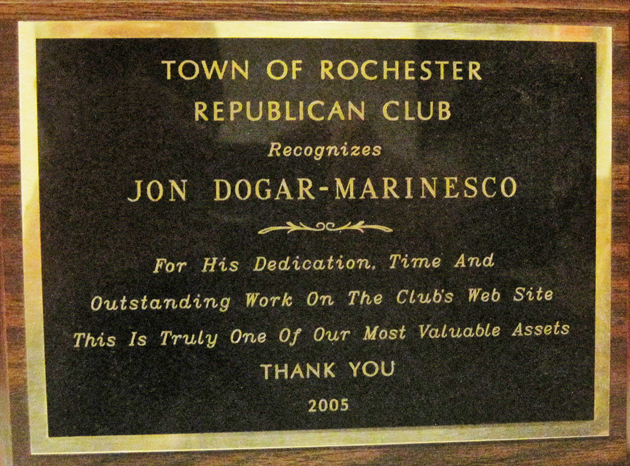 FACT #5
On Election night 2007 the Republicans celebrated the electoral victory at my place. Next morning or so, David openly became Boss Hogg, and I became openly vocal about it.

FACT #6
Sometime in 2008, O’Halloran offered to ease my burden, and asked to control the website. Disgusted with his shenanigans, I gave him the password and all necessary access information.

FACT #7
After about three months, seeing that not an iota was added to the website, I took away from O’Halloran the possibility of using my domain name. The Club was dead, and the idea of him and the Bernardos using my intellectual property was not appealing.

FACT #8
While having a beer with Shane Ricks, I shared stories from the beginning of the “internets,” mainly about the registering-domain-names rush. I told him how I sold the domain name webony.com to Muhammad Ali’s daughter, for $5,000. Lately, I heard from different people that I asked $5,000 for RochesterRepublicans.com. What a crock of bull!

FACT #9
Eventually, David O’Halloran got his own website, the New York States’ Top Republican Site. Everybody should visit it once, to see how many New York States David has in mind.

FACT #10
David O’Halloran lost his mind. There is no other explanation for this comment he left on this blog:

Did any of you read the article? It is about Malcolm Smith. Jon is there a point to any of this? Or are you just acting out like a spoiled child not getting what they want? Never answered why Leon or the Club cannot have their domain: http://www.RochesterRepublicans.com? Please explain why you think it’s yours?

Club’s domain? Leon’s domain? Stop bitching, David! When was the last time you got to keep a car just because you paid for gas while renting it?

12 Responses to David O’Halloran, full of it