Posted on December 29, 2013 by Jon Dogar-Marinesco

The town’s holiday party – at Ivan’s, on December 7 – had all the expected ingredients: hugs, kisses, smiles; even the Grinch put in an aparition. As I was greeting a group of people I knew, I was surprised by the way Councilman Brian Drabkin looked at me. If looks could kill… Later in the evening I approached him hoping for an explanation, but all I got was “I’d rather not speak to you.”

I’m not going to bore you with details of Brian being Brian, but I’m telling you that the idea of an elected official not answering a resident’s greeting does not sit well with me.

I scanned the ten-years history of my knowing Brian, and here are the highlights…

In 2003, Brian Drabkin ran – unsuccessfully – for a Town Board seat. I offered campaign help to the entire Republican slate, and Brian benefited from my donated work. I vividly remember how the candidates refused to campaign door to door with Brian. I saw him in the following years, and he appeared to be almost normal.

After the Republicans won the 2007 election, David O’Halloran put enormous pressure on the rookie Town Board members to appoint Brian Drabkin chairman of the Zoning Board of Appeals. Here is what a reliable source has to say about Brian on the ZBA:

Drabkin’s beyond strange. He’s been a malignant presence on all boards upon which he’s served. One story is about his altering of official records (illegal). Another is how, as chair of the ZBA he led a Use Variance review repeatedly referring to Area Variance criteria which resulted in an approval (absolutely not legal) which led to a FULL TRAINING from Dennis Doyle and MaryLou on ZBA duties. Plus, he made many inappropriate statements when he served on the planning board.

Somebody in the know chipped in:

Drabkin is definitely one to hate government so much he wants to be in it to fuck it up so it doesn’t work on behalf of the people. Drabkin is for whatever, where ever, with no regard whatsoever for the impacts that may be produced. He is absolutely not a person to be on any political board.

Tell it to David O’Halloran!

In 2011, two Republican Town Board members – Tavi Cilenti and Manuela Michailescu – finished their four-year terms. On May 17, long before any of them decided to run again or not, David O’Halloran brought in the candidate Brian Drabkin. Of course it’s just a coincidence that both Tavi and Manuela have minds of their own and refused to vote as “suggested” by O’Halloran.

As Terry Bernardo was running for a second time and nobody was stepping up to challenge her, Manuela Michailescu gave the voters a choice by forcing a primary. At that time David O’Halloran was Bernardo’s most ardent supporter, so he did everything in his power to assure Terry Bernardo’s re-election as Legislator and, at the same time, eliminate Manuela Michailescu from the Town Board race. When asked to schedule the Town Caucus after the Republican Primary, O’Halloran stated that the Caucus is going to be early, before the Primary, because… “Brian is excited” to join the Town Board! Obviously David was even more excited to have his puppet on the Town Board!

Brian Drabkin ran unopposed and surprise, surprise, he got in, but the election results show 860 blanks. O’Halloran achieved a trifecta: Manuela out, Bernardo and Drabkin in. Brian’s priority as a newly minted Town Councilman was to give a made-to-order “Pride of Rochester” award to Terry Bernardo. He even offered to pay for the plaque. Next thing you know, Brian Drabkin and David O’Halloran submitted resumes and applications for the Golden Hill LDC board of directors.

Soon after becoming a Town Board member Brian Drabkin became an embarrassment. Among other displays of weird behavior, he left an important and well attended anti-fracking public hearing because he was “tired.”

This past Thursday I attended the last Town Board meeting of the year, dedicated to interviewing applicants for various boards and commissions. Steven Fornal applied for a seat on the Zoning Board of Appeals, for which he is superbly qualified. While all other Town Board members respected Steven’s experience in zoning and planning, Brian Drabkin felt the urge to open his mouth. He advised Steven to show compassion if appointed to the ZBA. The example he used, about a man who wanted to sell his property but realized that a building he’d built sixty years ago was on someone else’s land, illustrates Drabkin’s complete lack of understanding of the very board he chaired. The ZBA has no authority to allow a variance for someone who built a structure on other people’s property. So, Drabkin’s idea of compassion involves illegal acts by the ZBA. But, that’s Drabkin… He operates at a lower level:

After 2007, when O’Halloran gave Drabkin the ZBA Chairmanship, Brian stopped answering my “hello.” It happened at the Board of Elections, it happened at Pinegrove before a Republican Committee meeting (also attended by Brian’s wife, a registered Democrat!). Brian does not answer Manuela’s greetings. What Brian does – in his own words – is voting as told by O’Halloran, because O’Halloran could do no wrong.

You read this far, you deserve a chuckle. I searched for “Drabkinland” on Google, and look what I got: 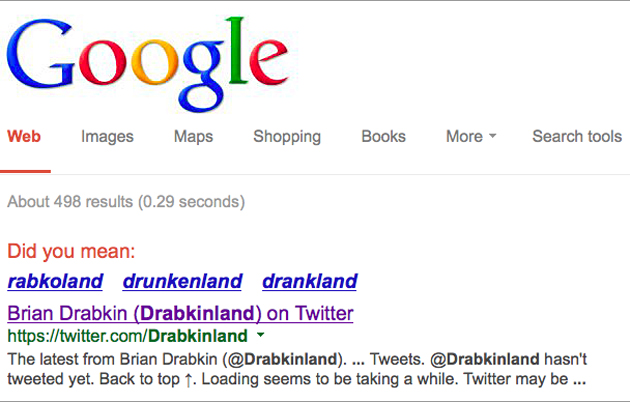 5 Responses to Holiday spirits in Drabkinland